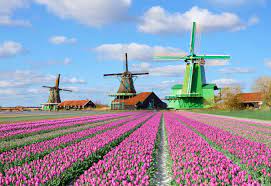 Contents hide
1 We got cassette, CD, DVDs and Blu-Ray
2 Netherlands turned carrots to orange
3 The first stock market in the world

We all know that Netherlands is a great country to live in with the its best healthcare services, best childcare, good economy, high nutrition diet of the people, great education system and people keenly interested in biking. So, there is no doubt in Netherlands being among the best country to live in and having the happiest population. It totally has that vibe!!

We got cassette, CD, DVDs and Blu-Ray

Physical media like cassettes and DVSD were invented in Netherlands by theDutch electronics giant Philips. They began this journey by the invention of cassettes in 1963 and with the need of the hour moved on to replace cassettes with DVDs in 1997. Evolution is the basis of life and so is the case in the field of innovation in Netherlands. So, when there was need they gave a new concept of blu-ray to the world.

The phrase Netherlands turned carrots to orange seems so interesting and yet so confusing. Like how can you turn two completely different things into one another. So, here is this interesting fact. In Ancient times the colour of our favourite carrots was not orange.

It used to be white, purple or yellow. This transformation came as a tribute to King William of Orange who helped Dutch to win independence from Spain in the 17th century, so to honour the king the Dutch farmers turned their carrots orange and the charm of orange was that much that it became the popularly known colour of carrots. Now How cool is that!!

The first stock market in the world

What an amazing thing is that the Dutch legislators and businessmen back in 1602 invented the first stock market in the world. This was done to fund the Dutch East India Company and its long trade-based voyages from the Netherlands. The Dutch were also the first to develop Fairtrade certification, launching the Max Havelaar certificate in the 1980s. These amazing innovations really make Netherlands a precious gem in the world.

Here, the people are so into bringing out their creativity that it amazes the whole world. So, here is a pat on the back of Netherlands (metaphorically!!). Go Netherlands!!

Read More on why Netherlands is the best country to work in Europe Culture of Netherlands: Rich and Diverse

Previous articleStargazers In Netherlands Get Ready To Explore The Sky: Best 4 Places For Stargazers in Netherlands
Next articleNetherlands Culture and Traditions Since 17th Century “Rich and Diverse” – Dutch Pride