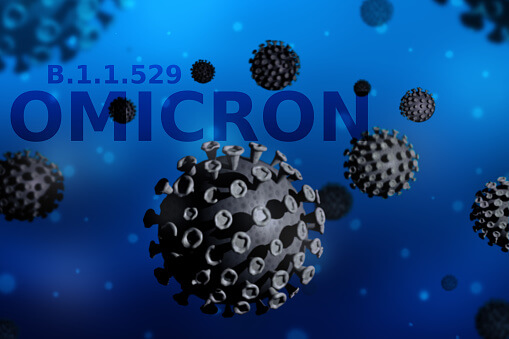 What is Omicron variant of Covid-19?

The World Health Organization designated the B.1.1.529 variant a “variant of concern” on 26th November 2021 and named it Omicron. WHO says there’s no evidence to suggest that symptoms linked to omicron are different from those caused by other variants.

Dr. Angelique Coetzee, a private practitioner and chair of South African Medical Association, was one of the first doctors in South Africa to detect the new variant. She told Reuters symptoms of the omicron variant were “very mild” and could be treated at home.

These infections were first reported in university students who were younger and tended to have milder disease. But, WHO said, omicron may be capable of causing severe disease or death, particularly among vulnerable populations.

Symptoms of COVID-19 caused by any known coronavirus variantcan include fever or chills, cough, shortness of breath, fatigue, muscle or body aches, headache, sore throat, a loss of taste or smell, sore and congestion or runny nose.

It will take weeks to understand the new COVID-19 variant, experts say.

The new variant poses a “very high” global risk, the World Health Organization said in a technical brief on how to prepare for Deadly Covid-19 Omicron Variant in the Netherlands. The WHO said the variant had a high number of mutations, some of them concerning and pointing to “immune escape potential and higher transmissibility.” That means it is uncertain if the current COVID-19 vaccines will work against it and that the variant has the potential to spread faster.

Experts in South Africa said the variant was likely behind a “rapid rise in cases” in the last two weeks in the country but that it was too early to tell if the variant was more severe. WHO urged countries to “ensure mitigation plans are in place to maintain essential health services” in case of a potential hospitalisation surge.

When and How it Emerged in the Netherlands?

The new Covid-19 variant, Omicron, was present in the Netherlands earlier than previously thought, officials say. It was identified in two test samples taken in the country between 19 and 23 November, which is before the variant was first reported by South Africa.

It is not clear whether those who took the tests had visited southern Africa.

It was previously thought that two flights that arrived from South Africa on Sunday had brought the first cases of the variant to the Netherlands.

The Dutch public health authority confirmed that Fourteen people on the flights to the capital, Amsterdam’s Schiphol airport before a flight ban was put in place, tested positive for Omicron, among 61 passengers who were found to have coronavirus and were immediately put into isolation at a hotel near the airport, while a small number were allowed to sit out their quarantine at home under strict conditions.

Health authorities appealed to all travellers who returned from southern Africa in the past week to get tested and set up a test centre at Schiphol Airport for Dutch citizens returning from the region. The tests are voluntary, and travellers can wait for the results in isolation at home.

However, while the two new samples reveal Omicron was in the Netherlands earlier than thought, they do not predate the cases in southern Africa. The variant was first found in a specimen collected on 9 November, according to the World Health Organization (WHO).

Early evidence suggests Omicron has a higher re-infection risk. But scientists say it will take about three weeks before it is known how the heavily mutated variant impacts on the effectiveness of vaccines.

“In a special PCR test, the samples showed an abnormality in the spike protein,” the National Institute for Public Health (RIVM) which announced the earlier cases said. “This raised the concern that the Omicron variant… might be involved. Health officials will notify the people involved and start source and contact tracing,” it said. The RIVM also said that a number of different strains of Omicron were found among the passengers on board the two flights.

“This means that the people were very probably infected independently from each other, from different sources and in different locations,” a spokesman said.

Dutch authorities, meanwhile, are also seeking to contact and test thousands of passengers who have travelled from South Africa, Botswana, Eswatini, Lesotho, Mozambique, Namibia and Zimbabwe. All other steps are being taken by the Dutch Ministry to prevent the spread of the new variant.

How Deadly Covid-19 Omicron Variant in the Netherlands has Become a Major Health Concern?

If it is necessary to brake the virus spread or delay it… then we will take those decisions, he said. What we do know is that people who’ve had one or two jabs are not sufficiently protected against the new variant.

And we can extract from the given statement that the Deadly Covid-19 Omicron Variant in the Netherlands is a major health concern. In addition to the above information, what is raising the concern more is that a quarter of coronavirus cases in Amsterdam are now known to be Omicron!!!

The minister admitted that it is extremely busy at the regional health boards but he also said vaccination capacity is being scaled up rapidly.

If you can’t make an appointment, there will be new slots tomorrow and again the next day, he said. The government hopes that everyone will have had a booster vaccination by mid January so that people have stronger immunity to fight against this Deadly Covid-19 Omicron Variant in the Netherlands.

Get to know about various health care gadgets that can help the people of Netherlands in the fight against Coronavirus by reading, Digital Healthcare Netherlands: How Covid-19 Pandemic boosted the Healthcare game

Previous articleHow to Plan for Kids Education in Netherlands? Explained with 5 Easy Steps
Next article7 Best Ways AI and Chatbot Apps Are Transforming The Mobile Industry?