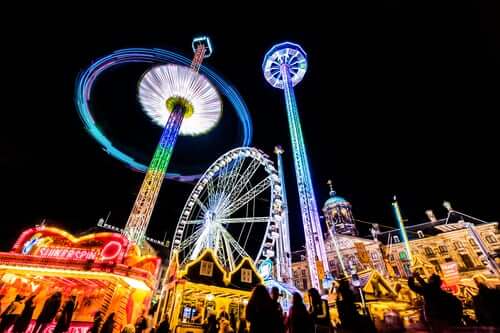 Apart from being famous for its rich traditional history depicted in the various structural monuments, Netherlands is also famous for these 10 Dutch Festivals that are Celebrated every year throughout the Netherlands.

Springtime festivals in the Netherlands celebrate the colourful blooms of tulips, daffodils, hyacinths, and bluebells, while wintery months see major squares blanketed with Christmas markets and celebrations of Saint Nicholas.

The Dutch really know how to party, and they also know exactly what makes a festival work. Out of the many amazing festivals hosted by the country, here are 10 that you should definitely not miss on!

Amsterdam Dance Event is one of Amsterdam’s annual highlights. The Netherlands is known by many as the birthplace of electronic music and dance festivals and it truly lives up to its name.

For five days every year, the capital turns into an electronic music hotbed, with concerts, parties, workshops and industry events being held all over the city. The lineup is scattered with a seemingly endless list of your favourite DJs, from new-era chart-toppers to old school legends and underground icons. ADE attracts thousands every year to the historic city and is a favourite for like minded ravers and industry figures from all over Europe.

King’s Day, referred to as Koningsdag by Dutch is a day when the citizens celebrate the arrival of the Male monarch in the region. It is one of the national festivals in Netherlands. The first male Dutch monarch was welcomed in the year 2013 in the month of April. Before that, the citizens of Netherlands used to celebrate Queen’s Day.

King’s Day commemorates the birth of King Willem-Alexander with street parades, dance parties and live music on 27th April. One of the largest festivals in the Netherlands, where colourful boat parties decorate the 17th-century canals, and live bands perform along the streets of Rembrandtsplein and Prinsengracht.

There’s also a vrijmarkt (free market), where you can shop for second-hand goods and Dutch delicacies during the event. The dress code for King’s Day is anything and everything orange, from shirts, pants and dresses, to wigs, hair ties, and face paint.

This is one of the gay pride festivals which is the largest in the world and is celebrated publically in the grandest fashion. Amsterdam is a gay-friendly city and is known to be this way for the longest time ever. Annually, people in thousands swarm the streets of the city with colorful banners and confetti and parade through the main pathways in Amsterdam. This is one of the top festivals in Netherlands and the major highlight of this event is “Canal Parade”, where several colorful and well-decorated boats cruise via the canals in the city.

The Canal Parade on Saturday sees around 80 decorated boats with DJs, go-go dancers, and drag queens sailing through the historical canals from 12:30pm until 6pm. For about 2 weeks, dance parties and DJ sets take place at numerous open spaces and nightclubs in the city, and the parties keep going right through the night and into the morning.

This is known to be the largest flower festival in the world. This is one of the best festivals in Netherlands and is held annually in the month of September in the wonderful town Zundert. All the wonderful exhibits here are crafted by volunteers. These volunteers are known to be Hamlets who are a group of people from a small builder community of the area.

These people work hard for almost 3 months straight to get the exhibits ready which are then paraded through the streets of Zundert town. The flowers on the exhibit are decorated just a week before the parade as they have to be fresh. Different themes are set for every year and the decorations are made accordingly.

Being a multicultural destination that the Netherlands is, Chinese New Year will be one of the most vibrant and colorful Netherlands festivals. Chinese New Year is one of the most celebrated festivals in the Netherlands by virtue of the Chinese community dominating the numbers in this country. Those who plan their vacation around the time of this festival can witness the ever so beautiful and awe-inspiring celebrations complete with a dragon parade, fireworks, and a lion dance.

These events are exactly what makes Chinese New Year one of its kind. One can also be a part of various musical performances, tea ceremonies, calligraphy workshops, and such. Do not forget to indulge in street food and try some authentic Chinese!

Step In The Arena Graffiti Festival

Over 200 graffiti artists show their skill at one of the largest graffiti festivals in Europe every year. The 2015 edition, held in the Berenkuil (“bear pit”) crossing in the main road in Eindhoven at the Insulindelaan, had artists come from all around the world: Spain, Australia, Italy, UK, France, Denmark, Germany, Austria and the Netherlands, and the result was gorgeous as hell.

This festival has left its mark on a number of walls in Eindhoven. With a whole lot of exciting things happening, the festival goes on for ten days in a row, and the city is completely under the spell hip hop and breakdance, skateboarding and BMX, graffiti and street art.

Roodharigendag is known as the quintessential gathering for redheads from all over the world, making it one of the most unique festivals in the Netherlands. It takes place every 1st weekend of September in Breda, a quaint city about 50 km south of Rotterdam.

There are many family-friendly activities throughout the 3-day festivity, including exhibitions, fashion shows, and workshops – mostly free of charge. Roodharigendag’s main event involves a photoshoot with all the red-haired attendees – over 6,000 proud redheads of various nationalities.

This is one film festival you absolutely have to attend, especially if you’re into cinema. The festival is known for attracting an audience that consists of all kinds of people, because its cinema promotes diversity, as well as building a relationship between directors and viewers. Aside from red carpet events and screenings, there are also opportunities for audiences to mingle with filmmakers.

The festival showcases some of the best of local and international cinema, and the films go on to compete in bigger festivals. The Dutch spirit of non-judgement and diversity comes through in the way the festival is conducted, and if you’re in Rotterdam at the time, this is something you should not miss.

During the month of August every year, Scheveningen city sky is lit up offering colorful breathtaking views. This festival is actually a competition in which the teams are judged based on who put up the most beautiful fireworks display. Scheveningen itself is an amazing tranquil beach town which is located near Hague city, and the fireworks in the sky add that extra charm to this place.

This festival is carried on for four days where the firework producers from every part of the country participate. Every night there are a total of two shows and on the third night, the winner of the firework competition is announced. The beachfront cafes are the best locations to enjoy these firework shows while munching on a delicious meal.

Creating site-specific theater and arts projects on a small island, Terschellings Oerol Festival is one of the most cutting-edge theater festivals in the world. The island of Terschellings, since 1982, has been transformed into Oerol, a unique natural stage for dance, theater, street theater, music, and site-specific art installations.

The shows create awe-inspiring experiences, and are conceptualised to match the surroundings. They’re both communal and intimate, so while you’re there you could possibly see a string quartet in underwear under a tree in one spot, a modern dance company set against the ocean backdrop, or a gripping play in a historic barn. It’s affordable, accessible, and absolutely worth every bit of time and money.

The Netherlands is a culturally rich country and the people here take every Netherlands holidays and festivals very enthusiastically. To know more about the rich culture of the Netherlands, Read Netherlands Culture and Traditions Since 17th Century “Rich and Diverse” – Dutch Pride